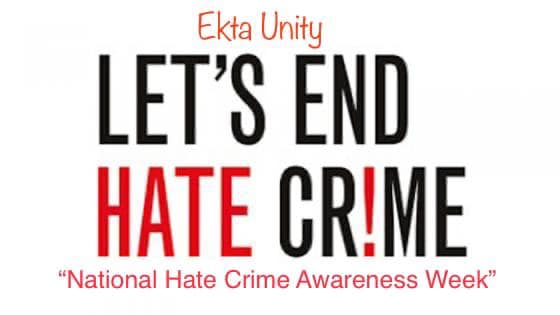 “We all stand together. We won’t stand for Hate”

A hate incident involves an act of hostility which you believe is motivated by your disability, race, religion, gender, identity or sexual orientation (also known as protected characteristics). Verbal abuse, threats of violence, harassment, bullying, intimidation or online abuse are just some of the many forms of hate related incidents. A hate incident becomes a hate crime when a criminal offence has been committed because of hostility or prejudice, and this can include offences such as assault, harassment, theft, criminal damage, hate mail and fraud.

Suman Ghaiwal-Chair of Ekta Unity said: “Hate crimes come in many different forms and they target people for characteristics and traits. It can have a profound impact on a person’s physical and mental health, often leaving them scared and intimidated from their experience. Some of our Ekta Unity members have experienced prejudice and discrimination first hand and the long term effects on their wellbeing has been challenging. This is why Ekta Unity supports the ‘National Hate Crime Awareness Week’ and help raise awareness of this issue”

Muna Chauhan-Vice Chair of Ekta Unity said: “The effects of hate crime has a shattering impact on lives, livelihoods and families. To be targeted because of who you are is absolutely unacceptable. Too many think that the issue is not a serious one. We can only tackle hate crime if victims report offences, no matter how hard that might be. Let’s use this week to promote this important initiative and raise awareness across our City of Coventry”

Coventry City Council have created a short film to highlight the harms of Hate Crime and to encourage the reporting of Hate Crime/Incidents. It is evident that hate crime is under reported and its impact is devasting on both victims and those around them. The aim of the thought provoking video is to show diversity and promote inclusivity, to raise awareness of hate crime and encourage any victims to report instances of hate crime and/or find support.

VIDEO: HATE CRIME, TOGETHER WE CAN SORT IT:

On behalf of the Ekta Unity Board of Trustees